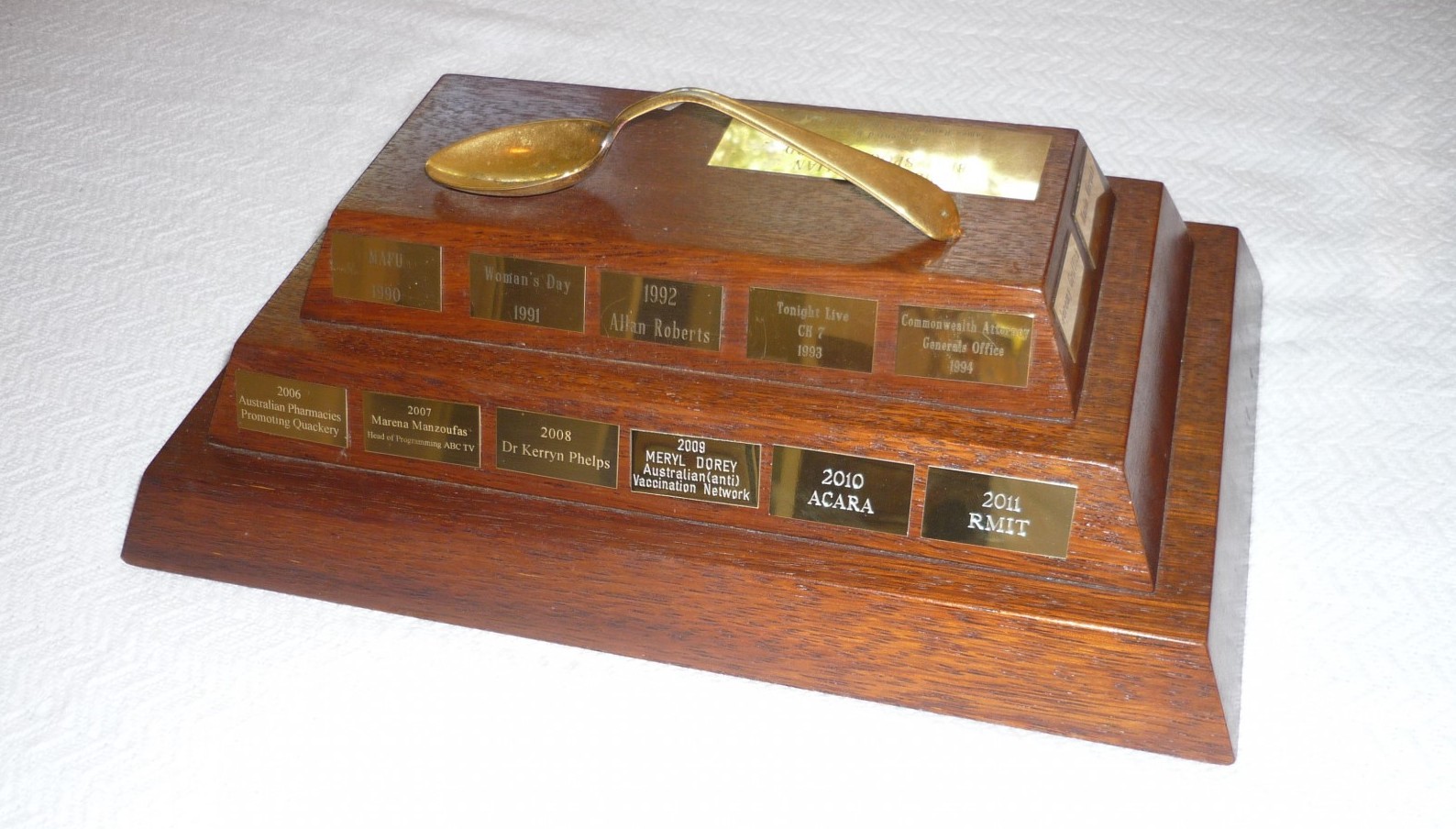 The celebrity chef Pete Evans was awarded the much un-coveted Australian Skeptics Bent Spoon award for 2015 at the gala dinner of the Skeptics National Convention on October 17.

The Bent Spoon is the Skeptics’ annual award for the “perpetrator of the most preposterous piece of paranormal or pseudo-scientific piffle”.

Evans is, of course, well known as a judge on the TV program My Kitchen Rules, and the promoter of the Paleo Diet, which eschews various products in favour of ingredients supposedly available to Stone Age man. The fact that much of what is included is a long way from what Stone Age people actually ate is beside the point.

Eran Segev, President of Australian Skeptics Inc, said “It is not so much for his diet that he is a worthy winner, even though it can apparently shrink tumours, reduce diabetes, cure autism, stop asthma and reverse chronic fatigue. There are elements of it that are probably useful, although bone broth for babies is a worry. No, he has won the award for his support of pseudomedicine, his stance against fluoridation, and his association with rabid anti-vaccinationist Joseph Mercola – “the legend” as Evans calls him. Is Evans genuine? I don’t know. Check out the lengthy disclaimer on his Facebook page to see how he protects himself from his own pronouncements. But he is certainly influential, and he has a wide following, so when he pushes something of highly dubious quality or scientific evidence, then it has to be a worry.”

A dishonourable mention in the Bent Spoon award went to Queensland-based Stephanie Messenger. Messenger is the author of Melanie’s Marvellous Measles, “surely one of the most dangerous children’s books that’s ever been self-published”, according to Segev. “Her efforts to bring anti-vaccination campaigner Sherri Tenpenny to Australia failed, but she was a close contender in our books.”

The award was roundly applauded by those present at the dinner.

Another award for 2015 was the Thornett Award for the Promotion of Reason. This commemorates Fred Thornett, a Tasmanian Skeptic who died in 2009 (in true awards fashion, we call it “The Fred”). It acknowledges a member of the public or a public figure who has made a significant contribution to educating or informing the public regarding issues of science and reason. In addition to a commemorative certificate, $1000 is awarded to the recipient or to a charity or cause of their choice.

This year the award went to Catherine and Greg Hughes, the West Australian couple whose baby son, Riley, died from whooping cough after only four weeks.

They set up a Facebook page to bring people’s attention to the need to vaccinate children and adults against whooping cough (pertussis). The page featured a photograph of Riley, with the request for those who are against vaccination look at the photo and “then come and tell me how you think immunisation is a bad thing”.

The message prompted a wave of support, including condolences from around the world and more than 46,000 likes within 24 hours. They continue their campaign against ignorance regarding vaccination and the vital need to immunise children and adults against a disease that could be prevented, but continues because of anti-vaccination propaganda.

“We thoroughly support the Hughes in their courageous campaign, and agree that no parent should ever have to suffer the pain that they have endured. The Fred citation is in memory of Riley.”

There was no Skeptic of the Year award this year.

“We hold that award to recognise truly outstanding efforts,” Segev said. “While there was a lot of very good activity going on in skeptical circles, there wasn’t one particular thing that stood out, that had really come to fruition.

“But some of those projects that are currently underway will be making themselves felt very soon. So watch this space.”

One thought on “Bent Spoon to celebrity chef Pete Evans”