2016 Skeptics awards – Spoon to Wilyman, Skeptic of the Year to Harvey and Vickers 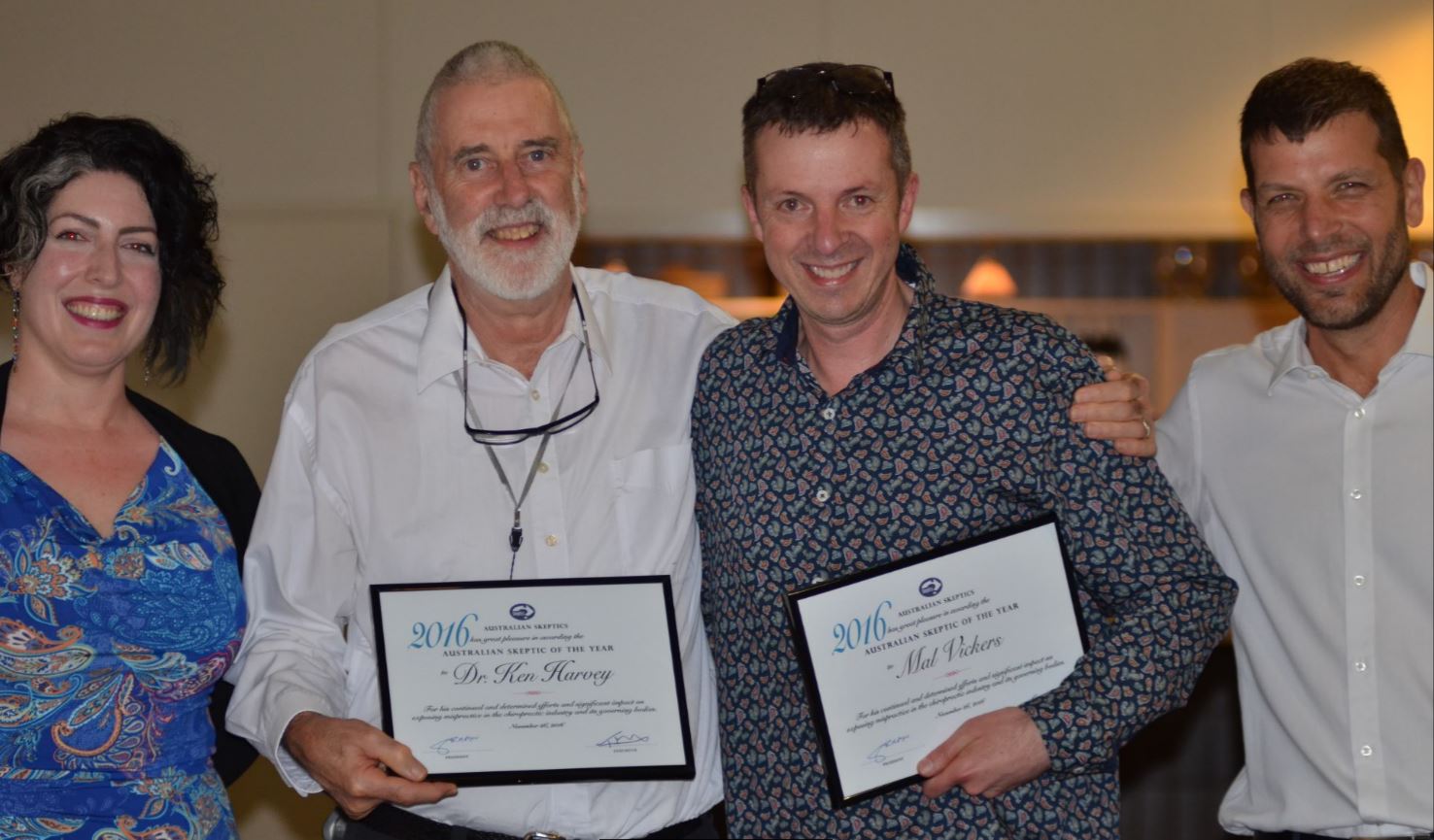 Celebrity winners of the 2016 awards from Australian Skeptics include a Victorian Government Minister, a Melbourne academic and “serial complainer”, and a controversial anti-vaccinationist and her Australian university.

The awards were made at the formal dinner on November 26 for the Skeptics’ Annual Convention, which this year was held in Melbourne.

Thornett Award for the Promotion of Reason
The Victorian Health Minister Jill Hennessy has been awarded the Skeptics’ Thornett Award for the Promotion of Reason. Colloquially called “The Fred”- it commemorates Fred Thornett, a Tasmanian Skeptic who died in 2009 – this award acknowledges a member of the public or a public figure who has made a significant contribution to educating or informing the public regarding issues of science and reason.

“As every public figure knows, especially those in more heated arenas, hate mail and vicious trolling on social media are part of the job,” said Eran Segev, president of Australian Skeptjcs Inc. “Death threats and promises of violence are another matter. Ms Hennessy has received all of those, and courageously faced down those who misrepresent and mislead the public in their promotion of dodgy medical claims and practices, in this case anti-vaccinationists and rogue chiropractors. She was as forthright in her public criticism of claims that are not supported by science and, in the case of chiropractors, ignore the directives of their own professional bodies. She also went public in revealing the mail she received – usually anonymously – from those who ‘disagree’ with her; disagree so much as to threaten violence and even death for daring to point to their errors and misleading statements.”

Skeptic of the Year
Another positive award from the Skeptics is “Skeptic of the Year’, given to those in the Skeptical community whose efforts go above and beyond what can reasonably be expected of committed campaigners. “This year the award was issued jointly to Dr Ken Harvey and Mal Vickers for their continued and highly effective work in exposing claims and practices of chiropractors that mislead and misrepresent the benefits of their activities, and can be dangerous to members of the public,” Segev said. (Pictured above are Harvey and Vickers with Skeptics committee member Jo Benhamu, who announced the award, and Australian Skeptics Inc president Eran Segev.)

Dr Harvey is adjunct Associate Professor at the School of Public Health and Preventive Medicine at Monash University, and one of Australia’s leading campaigners against non-science based medicines and a critic of pharmaceutical marketing. He has been described by The Age newspaper as an “anti-quackery crusader”, and by Choice as a “serial complainer”. Mr Vickers is a long time member if Victorian Skeptics and an indefatigable net surfer who exposed hundreds of websites of chiropractors who made unsubstantiated claims online.

“Harvey and Vickers also exposed the inadequacies of the professional bodies that supposedly oversee these practitioners, ignoring misleading claims and damaging activities and thus indirectly ignoring the protection of the public,” Segev added. “No more, though, thanks to the efforts of Harvey and Vickers. Their work continues.”

Other strong contenders for the SotY were Ken McLeod and Peter Tierney, both past winners of the award, who have also campaigned against anti-vaccination nurses and the eventual winner of this year’s Bent Spoon.

Bent Spoon Award
On that topic, the less-than-positive Bent Spoon is awarded to the perpetrator of the most preposterous piece of pseudoscientific or paranormal piffle of the year, and is one of the least desirable prizes in the country. Past winners have included Pete ’Paleo’ Evans, the CSIRO’s new head Larry Marshall, the ABC, the Pharmacy Guild of Australia, and a psychic dentist.

This year’s recipients are anti-vaccinationist Judy Wilyman, her academic advisor Brian Martin, and the Social Sciences Faculty of the University of Wollongong for awarding her a doctorate on the basis of “a PhD thesis riddled with errors, misstatements, poor and unsupported ‘evidence’ and conspiratorial thinking”.

“Wilyman continues to defend her degree with endless diatribes to all and sundry. Her university went into defence mode with a pathetic ‘free speech’ argument – which means free to present rubbish and be rewarded for it. Many within the university’s own staff, those who actually know what they are talking about, came out to criticise their own institution. A bad move by a respected institution; an expected move by a noted anti-science anti-vaccination zealot.”

Dishonourable mention goes to the ABC’s now-defunct Catalyst program and former reporter Dr Maryanne Demasi for an inaccurate and alarmist one-sided unscientific report on supposed brain damage from wifi technology, and for being a repeat offender in that respect.

7 thoughts on “2016 Skeptics awards – Spoon to Wilyman, Skeptic of the Year to Harvey and Vickers”