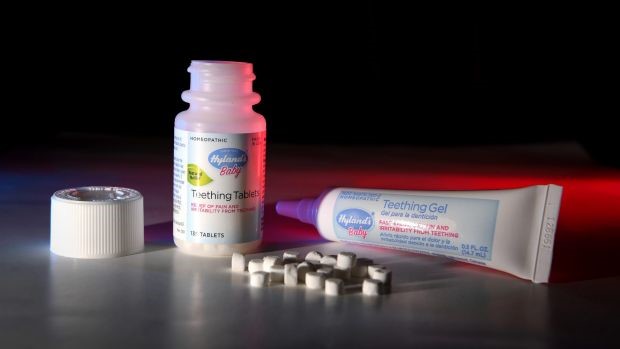 The product, Hyland’s Baby Teething Tablets, had earlier been found by the US FDA to contain inconsistent amounts of the toxic substance belladonna and posed a risk to children.

Vic Skeptics committee member Peter Hogan has been investigating the sale of Hyland’s teething products in Australia. He told Fairfax Media that “I was quite shocked that the [pharmacy at the] Royal Children’s Hospital was selling the stuff.”

“I’m concerned parents may be gambling with their babies’ health.”

The FDA investigated the product’s links to the deaths of 10 babies in America. It urged parents to dispose of the tablets and seek medical care immediately if children experienced symptoms, including seizures, difficulty breathing or agitation.

It requested the manufacturer, Standard Homeopathic Company, to recall the products, but the company refused. Late last year, however, a Hylands media release said it was discontinuing the distribution of its teething products in the US with “much sadness” after the FDA’s safety warning.

Australia’s Therapeutic Goods Administration investigated Hyland’s teething tablets and gel after the FDA issued its safety alert, but it apparently found no quality issues and said no action would be taken.

Hogan questioned whether more testing was required considering the FDA’s finding of inconsistent levels of belladonna between batches.

Concerns about the ingredients of teething gels go back some years. In Britain, the ingredient salicylate was removed from Bonjela Teething Gel after a 2002 study by the Commission on Human Medicines revealed it to be hazardous. A study published in the Medical Journal of Australia found that chronic salicylate intoxication could occur in children using these over-the-counter teething gels, even at close to the recommended doses.

Symptoms of teething gel-related poisonings include gastrointestinal problems, hyperventilation, tremor and memory lapses, and the risk of death.

A TGA spokeswoman told Fairfax Media that samples had been tested from two batches of the tablets and no problems were identified. She said one batch of the teething gel was tested and the level of belladonna did not warrant safety regulatory action.

“However, based on further information from [the] FDA we are considering whether testing of more samples will be useful,” she said.

Hyland’s website lists numerous pharmacies that stock its teething products in Australia. Fairfax Media found it for sale at Drew Wood Pharmacy at the Royal Children’s Hospital on Thursday.

Vic Skeptics president Chris Guest had earlier written to the pharmacy with the Skeptics’ concerns, but had not heard back.

Belladonna, also known as deadly nightshade, is a plant that has been used in cosmetics and herbal medicine since the middle ages. It is also used as a recreational drug because of the hallucinations it can produce.