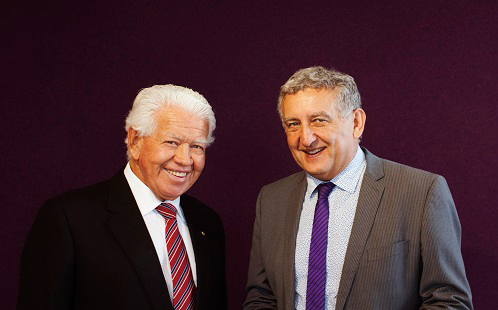 The amount – described as “untied” and “a gift” – is a 50/50 split between the Blackmore Foundation, run by Marcus and Caroline Blackmore, and the Blackmores company itself. It is said to be “the most significant investment into research and development in the history of the company”.

Blackmore’s has donated to the Institute before for research scholarships, and the same applies to the current donation. (Marcus Blackmore is pictured above – left – with Prof Alan Bensoussan of NICM.)

Among a range of other associations with universities both in Australian and overseas, in 2015 Blackmores gave Sydney University $1.3 million to establish a chair in complementary medicine, but in the almost two years since that was announced the university has been unable to find someone to sit in it.

When the Marcus Blackmore Chair was first announced, Bruce Robinson, at the time Dean of the University’s School of Medicine, told The Australian newspaper that he knew a backlash was coming when he signed off on the agreement to fund research into the effectiveness of complementary medicines.

“I’m a sceptic but I’m an inquisitive sceptic and it isn’t good enough to sit on the sidelines,” he told the paper.

At the time, Prof Ken Harvey, who had quit LaTrobe University when that institution signed a research deal with Swisse, another vitamin company, said that “I have no doubt that Blackmores will be making use of this link [with Sydney University] to promote their products, for most of which there is no evidence base and are of dubious value.”

Western Sydney’s NICM has also not been without controversy. Last year it was nominated for the Australian Skeptics’ Bent Spoon award and more recently it was the subject of an Australian Skeptics investigation into claims made by its director, Prof Bensoussan, some of the associations it has with traditional Chinese medicine research involving endangered animals, as well as the nature of another sponsor, the Jacka Foundation, which spruiks naturopathy and homeopathy.

Blackmores might be hoping for a better reaction to its philanthropy than it got from Prof Robinson when he was asked if he popped vitamin pills: “Of course not. It is just feeding the fish.”