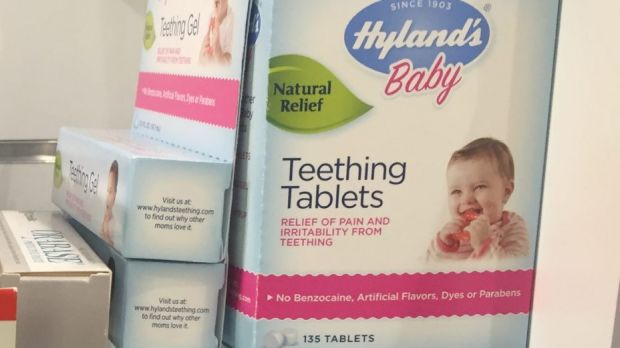 The product, Hyland’s Baby Teething Tablets, had earlier been found by the US FDA to contain inconsistent amounts of the toxic substance belladonna and posed a risk to children.

The teething tablets are now being recalled in Australia, with a bulletin from the Therapeutic Goods Administration last Saturday advising that they should be returned to their place of purchase.

Fairfax Media reports that the recall, initiated by Hyland’s Australian distributor Kadac in consultation with the TGA, comes two weeks after the same product was recalled by its distributor in the United States.

Last year, an investigation by the US Food and Drug Administration revealed 400 reports of adverse events, including 10 deaths.

It requested the manufacturer, Standard Homeopathic Company, to recall the products, but the company refused. However, a Hylands media release from late in the year said it was discontinuing the distribution of its teething products in the US with “much sadness” after the FDA’s safety warning.

Australia’s TGA investigated Hyland’s teething tablets and gel after the FDA issued its safety alert, but it apparently found no quality issues and said no action would be taken.

At the time of the Skeptics’ announcement of the products availability at the Melbourne hospital pharmacy, Hogan questioned whether more testing was required considering the FDA’s finding of inconsistent levels of belladonna between batches.

Which is exactly the same point that the TGA is now making in its bulletin: “While the TGA had tested samples of these products supplied in Australia and found no quality issues, Kadac is now recalling the tablets as a precautionary measure due to the potential safety risk that belladonna alkaloids can pose to children. The effects of belladonna can be unpredictable and could cause serious health problems.”

Concerns about the ingredients of teething gels go back some years. In Britain, the ingredient salicylate was removed from Bonjela Teething Gel after a 2002 study by the Commission on Human Medicines revealed it to be hazardous. A study published in the Medical Journal of Australia found that chronic salicylate intoxication could occur in children using these over-the-counter teething gels, even at close to the recommended doses.

Symptoms of teething gel-related poisonings include gastrointestinal problems, hyperventilation, tremor and memory lapses, and the risk of death.