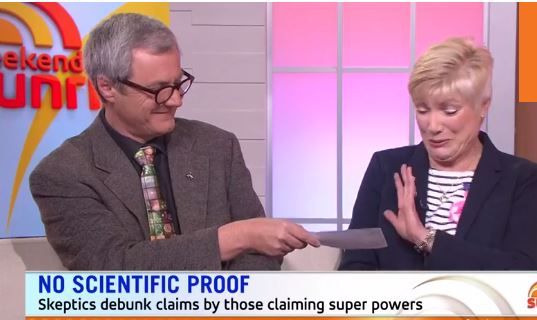 Ruthie Phillips, who bills herself as “Australia’s Top Clairvoyant-Medium”, has turned down an offer to be tested for the Australian Skeptics’ $100,000 challenge.

The offer was made to her by Australian Skeptics Inc committee member Richard Saunders on Channel 7’s Weekend Sunrise program on September 9.

Saunders is chief investigator with Australian Skeptics Inc, and a judge on Channel 7’s The One psychic challenge series. He had been asked on the Sunrise show to talk about the prize and the fact that no-one had successfully claimed it in 37 years. This followed an article on ABC Online which featured an interview with former Vic Skeptics president Terry Kelly, outlining the history of the challenge and the opportunities it offers anyone with a paranormal ability.

The $100,000 challenge is open to anyone who can prove a psychic or paranormal ability under scientific conditions.

As a result of the ABC article and Saunders’ TV appearance, the Skeptics have received a stream of applications from psychics, ghost hunters and even an egg-sexer, not to mention other media outlets wanting to know about the challenge.

Phillips looked decidedly uncomfortable when Saunders offered her a promotional cheque for $100,000, refusing to touch it.

“I personally wouldn’t set myself up for a fall like that because I think there are so many parameters attached to this.

“It’s an inexact science,” she said, though the term ‘science’ might be debatable.

“You don’t have control over all of the things like time and space. On the day, lots of things can cloud your ability.”

Phillips does, presumably, charge a fee for her services. One wonders if she offers a money-back guarantee if it is a ‘cloudy day’.

“If Ruthie has any real paranormal powers, she could easily take home the cash,” said Saunders. “And it’s tax-free!”

Saunders pointed out that, over the 37 years that the Skeptics have been around, they have tested hundreds of people, including many water diviners, as well as psychics, clairvoyants, prophets, and telekineticists. Every test is designed in accordance with the claimant’s skills, and has to be agreed beforehand by both parties to be fair and above-board.

The Skeptics’ offer is “still open to Phillips or anyone else in Australia who claims they can talk with the dead or read people’s auras and such like,” Saunders said.

It is interesting to note that many in the paranormal game in Australia label themselves as being the best.

Considering their promoted skills, any or all of those are invited to apply for the $100,000 challenge.