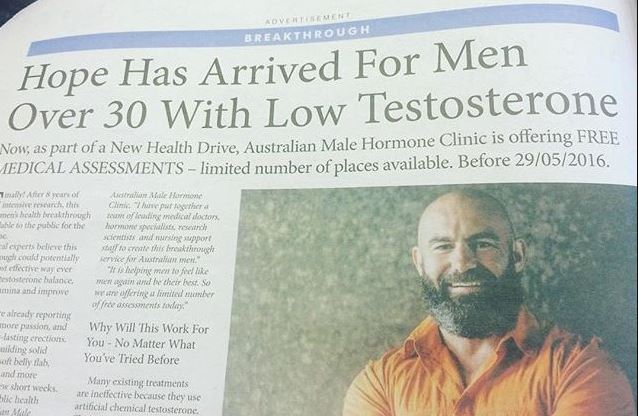 Wellness Enterprises Pty Limited, which traded as Australian Male Hormone Clinic, has been fined $127,500 plus costs after being found guilty and convicted of 17 charges related to unlawful advertising of regulated health services.

Charges brought by the Australian Health Practitioner Regulation Agency (AHPRA) followed advertisements the business published in newspapers around Australia between February and August 2017 for treatment of testosterone deficiency.

The full page ‘advertorial’ style advertisements made a number of claims about the benefits of treatment, including increased energy, focus, masculinity and strength, and ability to satisfy sexual partners. AHPRA challenged the validity of the claims citing best available evidence.

In what AHPRA describes as “an Australian-first”, the corporation was found guilty and convicted on 17 charges. Magistrate Atkinson cited the seriousness of the offences in fining the corporation $7500 on each charge, totalling $127,500. The corporation was also ordered to pay court costs of $3000 and professional costs up to $3000.

This is the first time that a corporation, not an individual health practitioner, has been convicted following advertising charges brought by AHPRA under section 133 of the National Law.

One issue is that Wellness Enterprises was placed in voluntary liquidation on September 12, so it is uncertain if it will every pay the fine.

Section 133 of the National Law states that a person must not advertise a regulated health service or a business that provides a regulated health service, in a way that:
• is false, misleading or deceptive or is likely to be misleading or deceptive, or
• offers a gift, discount or other inducement to attract a person to use the service or the business, unless the advertisement also states the terms and conditions of the offer, or
• uses testimonials or purported testimonials about the service or business, or
• creates an unreasonable expectation of beneficial treatment, or
• directly or indirectly encourages the indiscriminate or unnecessary use of regulated health services.

One thought on ““Australian-first” penalties for male hormone clinic”