2017 Bent Spoon to NICM; Skeptic of the Year Christine Bayne 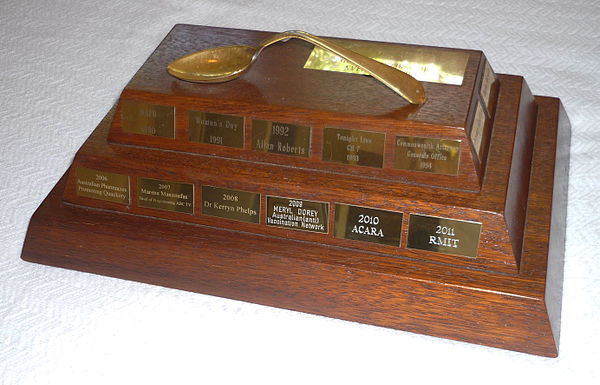 Every year, Australian Skeptics hand out a range of awards – some positive, and the not-so-desirable Bent Spoon. This year’s winners include a couple of key campaigners against pseudomedicine, and one university-based proponent of pseudomedicine.
The awards were made at the formal dinner on November 18 for the Australian Skeptics’ National Convention, which this year was held in Sydney.

The Bent Spoon is awarded to the proponent of the most preposterous piece of pseudoscientific or paranormal piffle of the year, and is one of the least desirable prizes in the country. Past winners have included Pete ’Paleo’ Evans, the CSIRO’s head Larry Marshall, the ABC, the Pharmacy Guild of Australia, the University of Wollongong, and a psychic dentist.

But, sadly, not everyone can win. Dishonourable mentions this year include:
• The Newcastle City Council for giving ‘the keys to the city’ in July 2017 to Jackie Gillies, “a successful psychic and businesswoman and reality television star”.
• ABC’s Landline program for a segment on biodynamic farming – how to plant crops by the moon.
• Dr (now suspended) John Piesse for his anti-vaccination activities, assisting parents to bypass the “no jab no pay” legislation by providing letters of exemption so their children can avoid otherwise compulsory vaccinations.
• And Aquapol, a company that markets expensive devices which are claimed to exorcise rising damp from your home, using energies unknown to science.

[See all of the nominations here.]

In fact, this year’s winner were themselves a past unsuccessful nominee.

“They tried hard last year”, said Eran Segev, president of Australian Skeptics Inc. “On their website, they promoted debunked and disproven alternative medicine cures by giving them credence via a university setting. These include homeopathy, spiritual healing, aromatherapy, crystal therapy, therapeutic touch, and ‘energy medicine’. The site even indirectly suggested that rhino horn could be used to treat ‘hot blood’, though thankfully that was taken down after we highlighted it in last year’s awards.”

So we’re happy to announce that the winner of the 2017 Bent Spoon is the National Institute of Complementary Medicine at the University of Western Sydney. Well done, you missed out last year, but you’ve hit the heights in 2017.

“When they were nominated last year they said they’d have a closer look at their site,” Segev said. “But they’re still promoting unproven treatments and now also involved in a project to establish a clinic for Traditional Chinese Medicine on the campus of the University of Western Sydney. The 2017 winner’s involvement is described as ‘clinical trials’, but the University acknowledges that the TCM clinic may be opened to the public – a highly dubious pseudomedicine given the imprimatur of university ‘research’. “

More information on Australian Skeptics’ past run-ins with NICM can be found here and here.

Colloquially known as the Fred, the Skeptics’ Thornett Award for the Promotion of Reason commemorates Fred Thornett, a Tasmanian Skeptic who died in 2009. This award acknowledges a member of the public or a public figure who has made a significant contribution to educating or informing the public regarding issues of science and reason. The award includes a cash prize of $1000.

Segev said “This year’s Fred goes to someone who has consistently provided intelligent and informed response to a wide range of high profile pseudomedical claims. While he might bemoan the fact that he will probably have a face-slap image on his tombstone, the Thornett award is a more positive image for this year’s winner, Dr John Cunningham.”

John is a noted orthopaedic surgeon, practising in Melbourne. He specialises in the treatment of spinal disorders. In 2016, he was awarded the Order of Australia (OAM) for services to medicine and the promotion of immunisation. He is also a supporter, fundraiser and spokesperson for Stop the Australian Vaccination Network (SAVN) since 2009, and praised for his constant campaigning for science-based medicine, particularly in regards to the less-than-scientific claims made for chiropractic.

So, in recognition of his continued and authoritative exposure of chiropractic misconduct and anti-vaccination misrepresentation, Australian Skeptics is happy to give its 2017 Thornett Award to John Cunningham.

Skeptic of the Year

Another positive award from the Skeptics is “Skeptic of the Year’, given to those in the Skeptical community whose efforts go above and beyond what can reasonably be expected of committed campaigners.

There are many people working away behind the scenes, doing great but often unacknowledged work on behalf of the skeptical movement, particularly in the high profile area of confronting the anti-vaccination movement.

This year’s Skeptic of the Year goes to Christine Bayne for her continued work in developing an unparalleled catalogue of activities by the anti-vaccination movement (particularly the tour of Vaxxed, the anti-vaccination film noted for its secret screenings behind closed doors) and for her ongoing role in fighting pseudomedicine generally.

Christine works tirelessly out of her country home, far from the day-to-day hustle of the anti-vax movement, and yet she is a key player in the battle with the forces of ignorance.