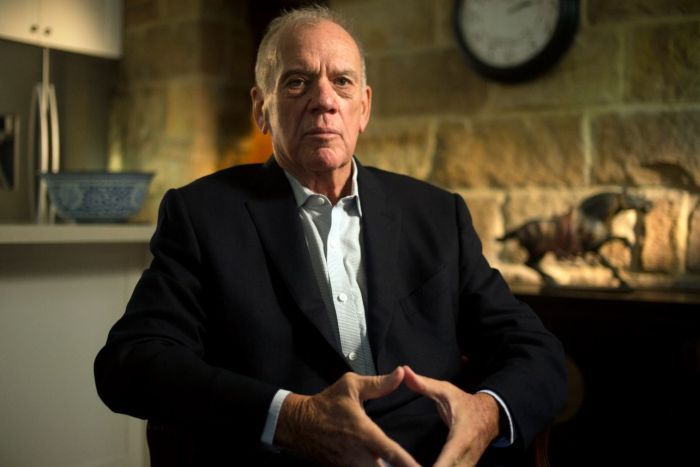 Australian journalist Mike Willesee has died at the age of 76 after a long battle with throat cancer.

As the ABC relates, “Willesee became a household name after fronting the ABC’s Four Corners program for two years from 1969 and was described as a “trailblazer” of Australian journalism. He then left the ABC, joining Channel Nine in 1971 for his own nightly program, A Current Affair.”

But he is also noted as the only person to win both positive and negative awards from Australian Skeptics.

He had a long, largely positive, relationship with the Skeptics during the 1980s, but less positive during the 1990s.

Through the two Channel 9 current affairs programs he produced and/or hosted, A Current Affair and later Willesee, he was in on the ground floor of the skeptical movement in Australia.

In 1980, the Willesee program ran a short piece on the water divining tests, featuring James Randi and Dick Smith. It was this program and the way the tests were carried out and then exposed to the public that was the inspiration for the launch of Australian Skeptics in Melbourne and Sydney in 1981.

Later programs which involved the Skeptics included:
• 1984: The Skeptics exposed the Melbourne and Metropolitan Board of Works (MMBW) which used an American psychic archaeologist and diviner, Karen Hunt, to conduct a survey of long demolished buildings that left an “electromagnetic photofield” (EMPF) which she could detect with divining rods. Hunt used her rods to draw an alleged reconstruction of the former farm at the MMBW’s historical park at Point Cook. Her reconstruction resembled an American mid-Western farm of the last century. The general manager of the MMBW said he was delighted with her findings. Willesee arranged for a satellite television interview between James Gerrand, the then secretary of Australian Skeptics, and Ms Hunt. The MMBW was awarded the Bent Spoon.
• 1985: The zoological world was stunned by the discovery of a Flabbit, a flying rabbit, in the outer suburbs of Sydney. The find removed murder and mayhem from the front pages of Sydney papers, and it was also the lead story on the current affairs program hosted by Willesee, who went on to call it one of his stories of the year. It should be added that his coverage was totally tongue-in-cheek.
• 1985: Five Queensland academics took the lid off creation ‘science’ at a seminar held at the University of Queensland. The seminar was organised by the Queensland Branch of the Australian Skeptics and covered by the Willesee program (among others).
• 1986: Australia was honoured with a visit by the Rev Brother Willard Fuller, a psychic dentist from America. According to Fuller’s wife, “The visit brought lots of media attention. A commentary about our healing work was done by a news program comparable to the 60 Minutes program here in the States [Willesee]”. Close viewing of the Willesee broadcast revealed that the Rev’s teeth were not exactly in pristine condition. The Findhorn Festival Group won the Bent Spoon for sponsoring Fuller’s visit.
• 1987: The Willesee program conducted tests on racing car driver Peter Brock’s Polarizer, which was a small box that attached to the fuel pipe of a car to make it run more efficiently. They used a car that had travelled 40,000km after a Polarizer had been personally fitted to it by Brock. Neither the car owner, nor motoring journalists Paul Wiezel and David Morley, could detect any difference in performance between the car when fitted with the Polarizer or a day later after the Polarizer had been removed. Brock went on to win the Bent Spoon.
• 1987: Willesee’s company TransMedia Productions won the Skeptical Journalism Award for a program on Uri Geller. The show consisted of a confrontation between Geller and Ben Harris, magician and member of Australian Skeptics. Ben Harris’ report on the event appeared in The Skeptic, Vol 7 No 1.
• 1988: The experiences of the Knowles family, in which they were driving across the Nullarbor when a UFO supposedly attacked their vehicle and lifted it off the ground, was initially only discussed with the police, but the story leaked to the media. The family were intercepted on their way to Adelaide by Channel 7, Adelaide, producer Frank Pangallo for the Hinch current affairs program. Pangallo reportedly offered the family $5000 for an interview, on condition they not discuss the story with any other media group for three months. Pangallo was later reported to have claimed that the Mike Willesee program was not far behind him, and the Knowles might have collected $20,000 had they been more patient.
• 1988: This was the year of the Carlos hoax, in which James Randi and the 60 Minutes program set up the media in Australia with a phony psychic (an oxymoron) named Carlos, but actually played by Randi’s partner, Jose Alvarez. The most dramatic turn of events, however, concerned Mike Willesee and the Channel 9 head of current affairs, Peter Meakin, who was also employed by Willesee’s TransMedia production company. Apparently Meakin was in on the scam, but did not inform Willesee, who was thus led to make statements later found to be untrue, such as saying that Carlos was ‘big’ in the US. Willesee was in the US at the time the program went to air, and was hosting only because normal host Jana Wendt was ill. Therefore he was being fed his information from Sydney, which was then transmitted back to Australia. As the Skeptics were involved peripherally in the scam, it was felt that the relationship with Willesee might have been soured due to his being caught out.
• 1988: The Willesee program was runner-up in the Skeptics’ Journalism Award for an expose of a New Zealand colour therapist.

Despite the ups and downs of the relationship, it was generally felt that Willesee had helped the Skeptics spread the word about the failings and outright cons of the paranormal world.

It was disappointing, then, to see Willesee later abandoning his own skepticism, and endorsing miraculous apportions and manifestations, such as the Turin Shroud and stigmata.

In 1999, Willesee was given the Bent Spoon award for the documentary Signs From God. The program rehashed a plethora of bleeding and weeping statues, stigmatics and other “pseudoreligious clap-trap”, as the award citation read.

“It sought to give this nonsense a patina of respectability by consulting various scientists and theologians, only to ignore their contributions in favour of sensationalism. Despite its claims of skeptical investigation, this show differed in no significant way from the rash of other nasty millennial doom-crying tripe being pushed down our throats by TV channels as the calendar rolls along towards 2000.

“Playing on people’s fears might be good for ratings, but it ignores the real harm that it can do to vulnerable people whose grasp on reality is in some way under attack. As too often happens after one of these irresponsible pieces has been to air, Australian Skeptics was contacted by a seriously distressed woman who had been so disturbed by what she had seen that she feared for her sanity. We could only tell her that such programmes were ‘junk TV’ and were designed to rate and not to inform.”

It was a sad end to a once productive relationship.