Free speech in The Skeptic – June issue out now 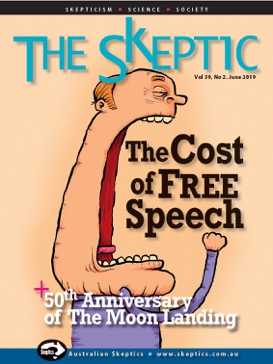 The June 2019 issue of The Skeptic magazine has been published, with a feature devoted to the nature, history and misuse of free speech.

Also featured are articles in recognition of the 50th anniversary of the first landing on the Moon by Apollo 11 – what it means for science and enlightenment today in an era where ignorant forces often work against them, and rebuttal of those forces which seek to deny the Moon landings ever took place.

That piece celebrating the landing can be read as the sample article in the special download preview.

The issue also contains discussions of science, history and popular culture, from military myths to exoplanets, ghost hunting apps, the persistence of the UFO movement, where to get help in answering tricky scientific questions, and much more.

The Skeptic is the second oldest English-language skeptical publication in the world, and it will be celebrating 40 years of continued publication next year. If you do not already subscribe do yourself a favour and get on board now.