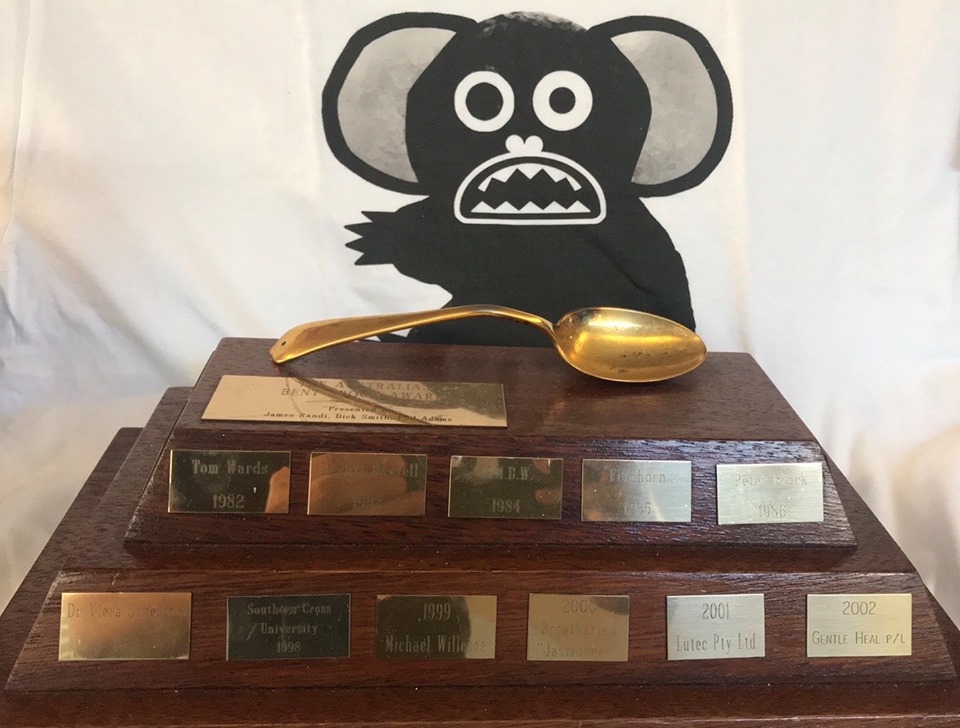 The Australian Skeptics notorious Bent Spoon award has gone to SBS-TV’s “Medicine or Myth”, a program where science takes second place to entertainment.

The Bent Spoon, one of the least sought-after awards of the year, is given to the proponent of the most preposterous piece of pseudoscientific or paranormal piffle of the year, with past winners including Pete ‘Paleo’ Evans, the CSIRO’s former head Larry Marshall, the ABC, the Pharmacy Guild of Australia, the University of Wollongong, and a psychic dentist.

What was particularly concerning about the 2019 ‘winner’ was that the reviews by the program’s three judges of pseudoscientific alternative medical treatments were more “television than science”, as one commentator has described it.

One episode included a segment on ‘emotional freedom techniques’, a process of tapping with two fingers on putative points along one’s ‘meridians’ to relieve stress. It is referred to as ‘psychological acupuncture’. In trials of this technique, no effect beyond placebo were found. However, the judging panel was convinced enough to extol the tapping procedure’s effectiveness by a momentary trial targeting a back pain in one of the presenters, and then an uncontrolled trial among a tiny number of subjects who reported their subjective impressions of success.

This may have been good television, but it was abysmal science, and highly irresponsible when people with real psychological issues are likely to be misdirected toward quackery and away from help that we know is effective beyond short-term, shallow placebo effects.

A dishonourable mention for the Spoon went to the National Seniors lobby group for promoting a special deal on vitamins and supplements to its membership. The group, desiring itself as “the independent voice of older Australians”, supported products from Australian NaturalCare which included curcumin, an active ingredient of turmeric, which has been noted for dubious efficacy along with a long list of adverse reactions, some of which are dangerous.

Other nominations for this year’s award ranged from the Aldi chain of supermarkets selling ear candles, the University of Newcastle’s course in alternative medicine, some of which have been thoroughly debunked, ABC TV’s Landline program for promoting biodynamic farming, SBS TV (again), along with ABC TV and 60 Minutes for sensationalist programs on glyphosate, a rain maker, and even Prime Minister Scott Morrison for his less-than-enthusiastic approach to climate change.

More positive awards were given for journalism and good work.

The Thornett Award for the Promotion of Reason is given to a member of the public who has made a significant contribution to educating or informing the public regarding issues of science and reason, but who is not necessarily part of the traditional skeptical community. This year’s award, which includes a $2000 prize, was given to Guy Nolch, editor and publisher of Australasian Science, a magazine that unfortunately was closed this year, despite Nolch’s great efforts to keep it alive.

“There are more Australian magazines devoted to hobby railways than science – for us to lose another one is a real concern,” said Tim Mendham, executive officer for Australian Skeptics Inc.

The Barry Williams Award for Skeptical Journalism is given for journalistic work that critically analyses or exposes issues related to pseudoscience or the paranormal. This year’s award went to Liam Mannix, journalist with The Age and the Sydney Morning Herald for a range of pieces covering supplements, academic mispractice, dodgy health treatments, and chiropractic.

The annual Skeptics’ awards were presented at the gala dinner of the 2019 Skepticon convention held in Melbourne on December 7.