Homeopathy – how could any honest person sell this rubbish?

If someone pointed a gun at you and demanded that you give them money, you could go to the police and have the thief charged with a criminal offence. If someone claimed that they could prevent or treat a life-threatening disease and charged you $200 per litre for water to do the job, you would waste your time going to the police because this is called “homeopathy” and there are no criminal sanctions against it. I find it impossible to believe that the people promoting this scam are not aware that it is fraud. I do not believe for a moment that anyone follows the manufacturing process that would be required to produce the extreme dilutions claimed on product labels. Why would you bother to spend money on all that diluting and succussing when the exact same effect can be achieved by filtering some tap water and putting it into small bottles?

Look at this picture of two bottles pretending to contain vaccines against Hepatitis B and Meningococcal Disease. Ignore for the moment the misspelling of the word “meningococcal”, and also ignore the principles of homeopathy which reject the concept of vaccines anyway (you can’t treat something that hasn’t started to happen). Concentrate instead on the expression “200C”. This means that these preparations have been made by taking 1% of a mixture, adding 99 times the resulting quantity of water or alcohol, shaking the new mixture, taking 1% again and repeating this process 200 times. That’s 200 times that 1% is further diluted a hundredfold. 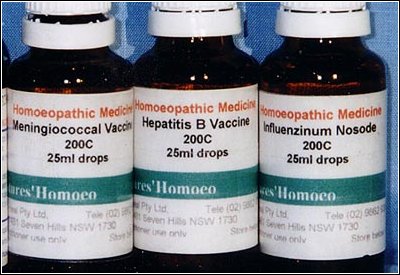 The final product in these bottles, if prepared according to the labels, would contain the following percentage of active ingredient:

In the real universe in which most of us live, if 25 millilitres of water contained only one molecule of the active ingredient, the percentage would be:

For those who think that there is a possibility that manufacturers of homeopathic preparations really do go through the claimed process, consider that each 25ml bottle in the picture above would require in excess of 800 manufacturing steps and would produce 495 litres of contaminated waste water. The amount of water required to produce the number of doses needed for the Australian government’s 2003 campaign against meningococcal disease would be 78% of the amount used to produce all of the Coca Cola consumed by Australians in a year. If the “vaccines” had to be produced in a hurry, the quantity of water required would be about the same as is used for all purposes in Sydney (population 4 million) for about eight hours.

Think about these things the next time someone tries to take your money by selling you some homeopathic medicine. Did I suggest that the practice is dishonest? Why, yes I did. Good! I would not have wanted to make a mistake.

You can help us to achieve our aims!